Book your cheap tickets for business class flights to Moscow with our travel experts at Fly World Class, to ensure a great travel experience from start to finish. The following are just a few of the many delights to be enjoyed in beautiful Moscow.

St. Basil’s Cathedral, what the Cathedral of Vasily the Blessed is commonly known as, is reason enough for many world travelers to visit Moscow. The stunning structure located on Red Square was built by order of Ivan the Terrible from 1555 through 1561, to commemorate conquests of Kazan and Astrakhan. Originally, the building included eight churches surrounding a ninth. A tenth church was built over the grave of Vasily in 1588; Vasily was a local saint who was venerated. The church was commonly considered a symbol of the Heavenly City in the 16th and 17th centuries, which resulted in its nickname “Jerusalem.” As designed by the architect, the structure takes the shape of a bonfire, with flames reaching to the sky. Many people who book cheap flights to Moscow make a visit to the cathedral a top item on their itineraries. There is a dazzling complexity to the cathedral that is incomparable and an awe-inspiring sight to behold. The building is now a State Historical Museum, having been confiscated by the Soviet Union and its anti-theist campaigns.

The Kremlin and Red Square

No one who travels to Moscow should miss out on a visit to world-renowned Red Square, where the Kremlin and other stunning buildings and architectural delights are situated. The Kremlin is now the official home of the President of Russia. “Kremlin” means fortress within a city, and the structure lives up to its name. The decorative Tsar Cannon is among the attractions at the Kremlin that are especially popular with visitors. Red Square was originally intended to be the primary marketplace in Moscow, but it was also the location of a variety of public proclamations and ceremonies. Since it was established, it has been the place where official governmental ceremonies take place. There were two military parades at the renowned site that have great significance. In November of 1941, there was a parade when Germans besieged the city and troops left Red Square and moved directly into the front lines of battle. Then in 1945, there was a Victory Parade during which Nazi banners were tossed at the foot of Lenin’s Mausoleum. Many history buffs who take cheap flights to Moscow appreciate the rich story behind Red Square 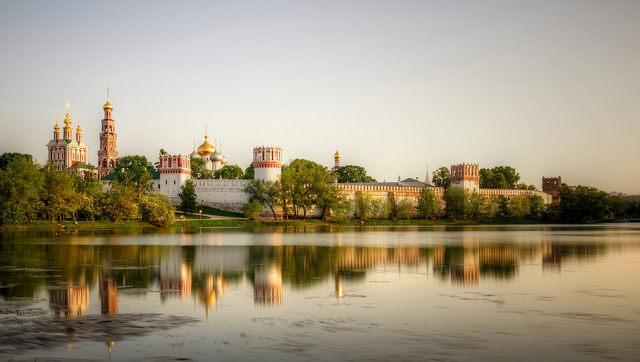 Many who want to experience nature in Russia travel first class to Moscow should make a visit to Aptekarskiy Ogorod Botanical Garden. Russia’s oldest botanical and scientific establishment, it was founded in 1706 by Peter the Great. The aerial view shows a circular, winding path from the outer to the inner circle of one part of the garden.

When you are ready to book luxurious first class flights to Moscow, contact our travel experts at Fly World Class. Our specialists will schedule a flight that will provide you with pampering and a comfortable, stress-free journey to world-class Moscow.