Book cheap first class airfare tickets to Manila with the friendly professionals at Fly World Class, to ensure an enjoyable trip to the capital city of the Philippines. Prior to World War II, Manila was considered by many to be the world’s most beautiful city. Its former glory was never regained, after the devastating damage of the war. It is still, however, a beautiful destination and happens to have two major seasons, those being the wet season and the dry season. The dry months are January through April and the wet season runs from May through December. The dry season is favored among visitors because the weather is also cooler. No matter when you travel to Manila, you have 16 districts to choose from that you can explore to discover a wide variety of popular attractions.

Traveling to Manila provide the opportunity to participate in many festivals going on at different times throughout the year. One of the most symbolic of Philippine festivals is the Mudpack Festival, and it celebrates progress made in preserving nature, comparable to the primitive age. Families will want to bring their children to this one because what kid would want to miss a mud-slinging festival? The Tinagba Festival takes place in February and is a draw for tourists all over the world. This festival 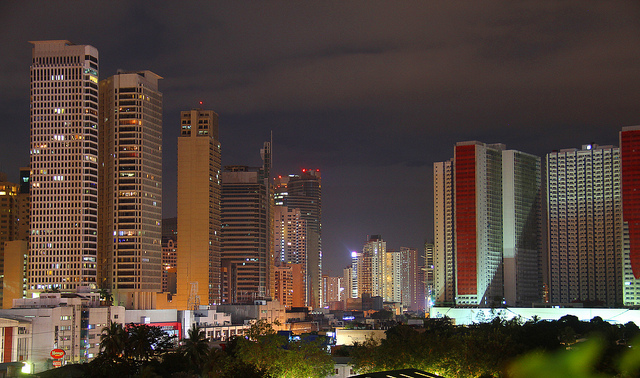 re-enacts an ancient traditional ritual focused around making offerings of the best produce in the land. The pagan ritual is the most beautiful for the eyes to behold and is complete with elaborate parades. The joy at the festival is exuberant.

For a more serene experience, many who travel first class to Manila visit San Agustin Church. The architecture of the Roman Catholic Church includes Colonial and Baroque. This is one of the Spanish colonial era churches in the Philippines that were named World Heritage Sites in 1993. Completed in 1571, it was constructed using bamboo and nipa. The original church was destroyed in a blaze in December of 1574, however. A new church built to replace the first was destroyed by fire in 1583, after a candle set drapes on fire. Wisely, the Augustinians chose to rebuild with stone and also build a monastery alongside it. This rich history is one reason so many who take first class flights to Manila and visit San Agustin Church. Hewn adobe stones quarried from Binangonan, Meycauayan, San Mateo, and Rizal were used. The work proceeded slowly, largely due to lack of funding. The monastery began operations in 1604. In January of 1607, the church was built and named St. Paul of Manila. The remarkable church, since that time, has continued to brave many challenges, such as enemy occupation and an enormous earthquake.

If comfortable and luxurious flights are as important to you as great customer service, talk to our travel experts at Fly World Class to book cheap business class airfare to Manila. You can look forward to being pampered and arriving feeling relaxed for your visit to the Philippines.