Your first class airfare tickets to Rome booked with Fly World Class will provide you with a luxurious and unforgettable journey to the Eternal City. The Roman Empire ruled land stretching from Egypt to Scotland, at its pinnacle. Countless ancient ruins and amazing artifacts make the city a leading destination, for visitors around the world who travel to Rome.

Construction of the Colosseum was completed in 80 A.D. The massive architectural phenomenon was the home of bloody battles, including the feats of gladiators, that titillated audiences in clashes between man and beast. In 82 A.D., the first of many bloody contests took place before crowds of up to 50,000. The structure is considered a wonder of engineering, and it is a leading destination for many travel first class to Rome. Insiders recommend having a guided tour, for a richer experience. 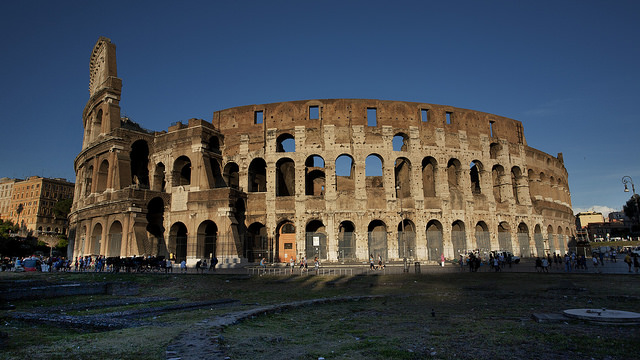 The Trevi Fountain is the largest Baroque fountain in the city and arguably the most beautiful in the world. Many who travel to Rome toss a coin in the fountain, to ensure a return visit, in keeping with legend. The spectacular fountain, widely known as the Fontana di Trevi, is an absolute masterpiece and one of countless pieces of remarkable Italian art in the city. The architectural elements are a travertine façade, statues made of carrara marble, and a reef of travertine. A 16.4-foot high statue of Ocean, or the god Neptune, carved by Pietro Bracci, is the centerpiece of this stunning architectural marvel. The more than $3,500 collected in the fountain daily are used to feed the city’s poor.

For countless tourists who visit Rome Italy, St. Peter’s Basilica is at the top of the itinerary. You can truly revel in the astounding artistic marvels of Rome at that one location. Built on the site where Peter the Apostle was crucified and buried, it is largely the wonder it is because of the contributions of famed artists such as Michelangelo and Bernini.

There are countless destinations which inspire tourists to travel to Rome, and the unique Capuchin Crypt is among them. This top attraction takes up very little space but is a big draw. The Capuchin Crypt is below the church Santa Maria della Concezione dei Cappuccini and is of comprised of several tiny chapels constructed of human remains. The burial crypt was built in 1631, when monks moved from an old monastery with the bones of deceased friars (300 cartloads full). By order of Pope Urban VIII, the soil in the crypt was brought in from Jerusalem. When a monk died, the monk that had been buried the longest was exhumed, making room for the newly deceased, who was buried directly in the soil. The bones that were newly reclaimed, which had typically spent 30 years decomposing, were then added to the decorative motifs.

The travel experts at Fly World Class excel at customer service. Book luxurious first class flights to Rome Italy to ensure a comfortable, relaxed journey to visit the Pantheon, the Sistine Chapel, the Arch of Constantine, or any number of other incredible sites in the city.