Book your business class flights to Zurich with Fly World Class to ensure a pampered journey to the capital of the canton of Zurich and Switzerland’s largest city. In the center of Switzerland, the charming and beautiful Zurich is on Lake Zurich’s northern shore.

Among Europe’s most import cultural history art museums, the Swiss National Museum is among the multitude of reasons people travel first class to Zurich every year. The museum was built in the historicist style in 1898. The architect, Gustav Gull, designed it in the form of the French Renaissance city chateaus. The exhibition tour includes prehistory as well as ancient times and the Middle Ages, up to the 20th century. Well represented are examples of chivalry, gothic art, and a large collection of carved altars, panel paintings, and liturgical wooden sculptures. One of the most common descriptive terms of the museum is that it is housed in a fairy tale-like building.

Old Town is a favorite destination of countless travelers to Zurich. In Old Town’s western half on serene, shady Lindenhof is where the fortified settlement of the Romans was built. The terrace provides an excellent view of the old town. In 1917, Lenin lived at number 17 on Spiegelgasse. On the same street, the 1916 Dada art movement was launched. You can also find the Shoemakers’ Guild House, which has been converted into a theatre. You can also see Hans zum Rech which dates back to the Middle 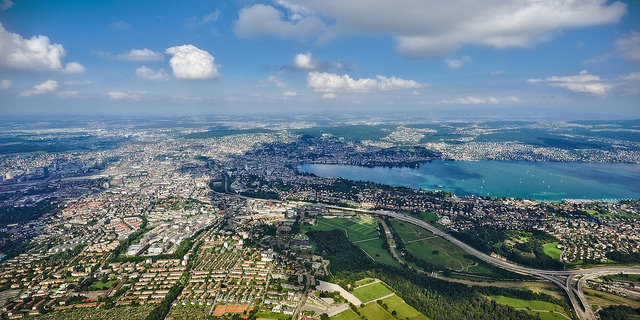 Ages and shows how decorative styles have changed through the centuries. The interior displays 17th century paintings and walls as well as fine ornamental ironwork.

“Fraumünster,” often mistakenly mis-translated to “Church of Our Lady,” actually means Women’s Church, referring to the abbey founded there by the Emperor Ludwig in 853 for aristocratic women of Europe. In the undercroft of the church are the remains of the 9th-century abbey church crypt. This type of historical landmark is a favorite destination among travelers to Zurich. Five stained-glass windows in the chancel that were added in 1970 are as much an attraction as the ancient structure itself. The windows are brilliantly colored and depict such scenes as Elijah ascending to heaven and an angel trumpeting the end of the world. A 1940s stained glass window in another part of the church is also stunning. It was created by Augusto Giacometti, and it’s called the Heavenly Paradise.

Nature lovers on cheap flights to Zurich frequently visit Uetliberg mountain, which provides an incredible view of Lake Zurich, Lillat Valley, the city, and the Alps in panorama. You can hike in warm months; but in winter, the trails become sledding runs.

When you are ready to book first class airfare to Zurich, give our travel experts at Fly World Class a call. Our skilled professionals will ensure that your flight will be pampered and relaxing and a perfect start to your memorable trip to Zurich.