Relax and enjoy your business class flights to London because when you arrive, there are plenty of wonderful attractions to enjoy. In addition to the sites named in more detail below, you can visit the Victoria and Albert Museum, which is free of charge. This museum is touted as the world’s greatest in art and design and represents more than 3,000 years of human creativity. Madame Tussauds London displays more than 300 incredible wax figures, including 14 interactive areas in which visitors can take pictures of themselves next to various iconic figures, including The Queen, Prince William and Kate, Miley Cyrus, and David Beckham. The latest additions are heroes and villains of Star Wars. 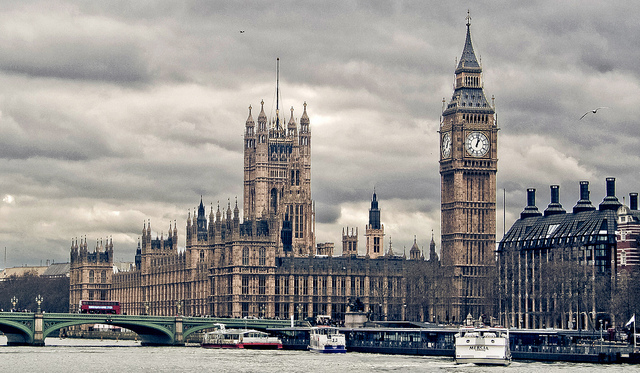 People across the world recognize that the giant clock Big Ben is undeniably a London landmark. After traveling first class to London, what better way to experience the city than to get an up-close look at this iconic location? Big Ben was built as part of the buildings for the Houses of Parliament after the Palace of Westminster was destroyed by a fire in 1834. The clock required a massive bell, and the first cracked irreparably at the first attempt to use it. The metal was re-melted and re-cast, and Big Ben first rang on May 31, 1859. A few months later, in September, Big Ben cracked. The bell was rotated so that the hammer would strike an undamaged section, and a lighter hammer was fitted. This is the same bell heard today.

Buckingham Palace and the Changing of the Guard

Buckingham Palace is the residence of the Royal Family and has been since 1837, when Queen Victoria ascended to the throne. When the flagpole at the top of the building is flying the royal standard, it means the Queen is home. On special state occasions, the Queen and other Royal Family members sometimes emerge onto the central balcony. During the summer, when the Queen is visiting her summer palace in Scotland, visitors are able to book tours of the Queen’s Gallery, the State Rooms, and the Royal Mews. The Changing of the Guard at Buckingham Palace is one of the main destinations for visitors who travel to London.

Westminster Abbey was founded in 1065 by Edward the Confessor. This stunning location is widely associated with British royalty, including Royal Weddings. For hundreds of years, monarchs have been crowned there. The church is dedicated to St. Peter at a site associated with Christianity long before the church was built. Many who book  business class deals to London make Westminster Abbey their top destination.

At the heart of London is the Coca-Cola London Eye, which gracefully rotates over the River Thames across from Big Ben and the Houses of Parliament. It is the tallest cantilevered observation wheel on the planet and a marvel of engineering and design. A ride on the London Eye provides you with a full-circle view of the capital and its famous landmarks. In recent years, it has been rated the number one visitor experience.

Our friendly travel experts at Fly World Class make it easy to book your first class airfare to London. Plan to enjoy your comfortable flight and prepare to be pampered before touching down in the world-class city of London.