Book with Fly World Class for cheap first class flights to Frankfurt Germany and your trip will get off to the best possible start. A world-class city, Frankfurt is much more than a global leader economically and politically. It is rich with history, culture, and landscaping that can take your breath away. You’ll want the luxurious comfort provided to you on your first class to Frankfurt before launching into your adventure.

“Mainhattan” is a nickname for Frankfurt, for its similarities to Manhattan. Traveling to Frankfurt transports you to a city known for towering skyscrapers, cosmopolitan flair, and global financial institutions, all located on the Main River. Among modern cultural treasures, the city is home to many centuries-old marvels. An ancient Roman settlement in the city can be explored at Archaeological Garden. Among the 1st-century remnants are Roman baths, complete with the heated floors, as well as walls of a Roman military encampment, and cellars and foundations of middle-class homes from medieval times. Remains of the 9th-century Carolingian Imperial Palace erected by Ludwig the Pious are also there. Many who travel to Frankfurt include a visit to the Archaeological Garden because of the opportunity to view remnants of the Roman era, the Middle Ages, and the Imperial Palace all in one location.

The Römerberg, Frankfurt’s Old Town Center, is at the heart of the city, and it is usually teeming with visitors, many who are refreshed from their first class to Frankfurt booked with Fly World Class. The uniquely picturesque public square is the busiest tourist / pedestrian zone. There are many open-fronted shops, which were common throughout town in former times. The Römer is a complex of 11 buildings from the 15th to 18th centuries, and it includes the Imperial Hall, Kaisersaal, where splendid banquets were frequently held in former centuries. 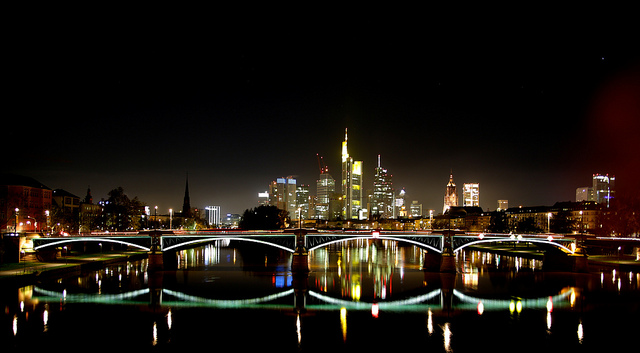 Many visitors that travel to Frankfurt place a visit to Goethe House and Museum at the top of their itinerary. Goethe House is the family home of Johann Wolfgang von Goethe, Germany’s most renowned writer. Not only was it his birthplace in 1749, he lived there through 1765. Visiting the home, you can see how wealthy the family was and where servants lived. Many rooms in the home filled with lavish décor can be explored. On the top floor is where the beloved author wrote many of his first works and played with his puppet theater as a child. Next door to the home is the Goethe Museum, which displays many masterpieces of the Romantic and Late Baroque periods in the 14 gallery rooms. The Goethe Tower gives further testament of the writer’s success and popularity.

Between the 13th and 15th centuries, the distinctive St. Bartholomew’s Cathedral was built with red sandstone in Gothic style. The standout among skyscrapers houses the famed sculpture Crucifixion, sculpted by Hans Backoffen in 1509. The relic considered to be of most importance is the skullcap of St. Bartholomew, which many of the Roman Catholic faith seek to behold.

Business class flights to Frankfurt can be as pleasant a memory as visiting the world-class city in Germany. Our expert travel professionals make it easy to schedule premium travel in seats designed for comfort and ease.