Book cheap business class to Greece with Fly World Class to enjoy the ultimate in luxury on your journey to this world-class destination consisting of two mainland peninsulas and approximately 6,000 islands in the Ionian and Aegean seas. The history of Greece goes back four millennia. No matter where you are in Greece, you are never further than 60 miles from the sea. Greek food is one of the experiences that no tourist should miss out on. An insider tip is to go where the locals go. Typical fare includes appetizers as well as fish or meat grilled or fried to order. Greece has been described as staggeringly beautiful. The weather is never extreme throughout the year, making anytime a great time to visit Ancient Greece.

Countless visitors who travel to Greece arrive at Athens International Airport (ATH), to the oldest city in Europe. The Acropolis of Athens is one of many ancient sites. The world-famous Parthenon is among the buildings at the Acropolis. The Parthenon is one of the world’s greatest cultural monuments, with its construction commencing in 447 BC. Of the surviving Classical Greece buildings in existence today, the Parthenon is considered the most important. Olympeion, Temple of Olympian Zeus, is the largest temple in ancient Greece; and it was built beginning in the second century AD. The Byzantine Museum in Athens is housed in a 19th-century palace and displays highly valued Byzantine art. More than 25,000 items are on display, including artifacts and artwork from the early Christian, medieval, and post-Byzantine periods. The Panaghia Kapnikaréa Church was built in the 11th century and provides an ideal demonstration of architecture from that period. It was nearly destroyed in the 19th century, but King Ludwig I of Bavaria intervened, saving the historic church. 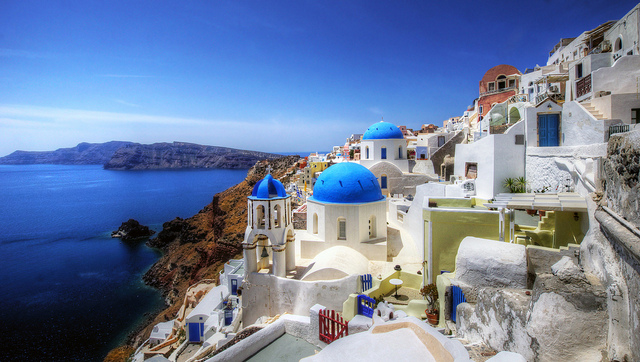 Santorini is a favorite destination for countless travelers to Greece. This most dramatic of Greek islands displays breathtaking architecture that is further enhanced by the deep azure of the surrounding sea. The cliff-top towns of Fira and Oia are what Santorini is best known for, as well as the Cycladic whitewashed buildings.

Another popular destination for visitors traveling first class to Greece is Thessaloniki, via Thessaloniki Airport (SKG). Famous partly because it survived the Great Thessaloniki Fire of 19117 is Ano Poli or Upper Town. The area is ideal for strolling because the winding alleyways provide up-close glimpses of distinctive traditional houses. There are many cafes to visit along the way. One of several historic attractions is the Church of Osios David, which houses a stunning mosaic in its apse.

Schedule your business class flights to Greece with our personable travel experts at Fly World Class. Our professionals will ensure that you enjoy a pampered and relaxing flight, whether your landing is at Athens International Airport (ATH), Thessaloniki Airport (SKG), or Santorini Airport, Greece (JTR), the largest airport in the south Aegean Sea.