Savvy travelers book cheap first class flights to Taipei for a luxurious journey to the capital city of Taiwan. The lively metropolis has many impressive sites and attractions as well as shining skyscrapers, spectacular entertainment, and flourishing industry. One of the best views of the city is in Taipei 101, which is currently the world’s eighth tallest building. In addition to an incredible view from the top, the lower levels offer fashion boutiques, upscale shops, great restaurants, and rousing nightclubs.

History buffs and architects alike who travel to Taipei often make their way to the National Palace Museum, which is one of the largest museums in the world of its kind. The collection includes over 10,000 years of Chinese history, going back as far as the Neolithic age and including the late Qing Dynasty. High quality pieces that were collected by China’s ancient emperors make up most of the collection. Many of the Chinese artifacts date back to the Tang Dynasty and the Song Dynasty, and some were owned by Emperor Zhenzong and later excavated and owned by Kuomintang General Ma Hongkui, who refused to make the significant findings public. Among the artifacts that were hidden until he died were gold nails, bands made of metal, and a white marble tablet from the Tang Dynasty. 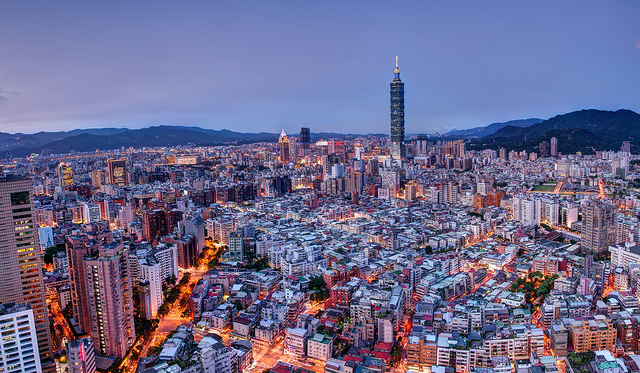 Many travelers who travel first class to Taipei visit the Miniatures Museum of Taiwan, which is very much a one-of-a-kind museum. Art in miniatures originated from German aristocratic times in the 16th century. The intricate artwork is shrunken to a size that is in keeping with international rule, that being 12:1. Each item in this magical wonderland is created by artistic masterminds. The stuff of childhood fantasies is represented in abundance in this museum that includes mystical creatures, pixies, fairytale characters, palaces, and much more. Souvenir shops make replicas of Miniatures Museum of Taiwan available for purchase.

Mengjia Longshan Temple, built in 1738, is one of the many attractions that capture the interest of travelers visiting Taipei. The ornate temple originally served as a place for Chinese settlers to gather and a place of worship. Residents have tenaciously rebuilt the temple after it was destroyed in part or in full after numerous fires and earthquakes. The most recent damage was caused during the American’s Raid on Taipei on May 31, 1945. It was believed that the Japanese hid weapons there, which is why it was targeted. The left hallway and main building suffered damage and many valuable artworks and artifacts were forever lost. The structure was rebuilt a few months after the war ended. Of interest to visitors are the Chinese dragons on the buildings. There are matching bronze pillars on the outside of the front hall and incense holders outside the main hall that visitors also find of particular interest.

Book cheap business class flights to Taipei with Fly World Class so that our travel experts can make sure you travel in unrivaled luxury to Taiwan.