Book cheap business class flights to Kuala Lumpur with Fly World Class to get your visit to a peaceful tropical retreat started in luxury and style. Our travel professionals will help to ensure that you experience unrivaled comfort on your journey. When you arrive to one of the top destinations for world travelers, you will be rested and rejuvenated.

When booking cheap flights to Kuala Lumpur, many travelers add a visit to the Petronas Towers to their list of must-see attractions. The world’s tallest twin towers in the world, the Petronas Towers are clad in stainless steel and resemble a pair of silver rockets positioned to launch. Tickets for guided tours are in high demand, which is why many people are careful to book tickets in advance. The buildings are considered fitting representations of the modern metropolis, even though they were constructed in 1998. The design of the towers is based on symbols of Islam, such as the eight-sided star reflected in the floor plans. The top five tiers of the towers represent the five pillars of Islam. Many travelers  to Kuala Lumpur look forward to seeing the towers first-hand.

There are many religious sites that tourists who travel to Kuala Lumpur like to see, such as Thean Hou Temple. The multi-story Chinese temple is dedicated to the heavenly queen it is named after. Eves on the upper decks are adorned with mosaic phoenixes and dragons. The temple is a favorite attraction during Chinese festivals and birthday celebrations of temple gods. Thean Hou is a place of worship as well as a popular spot for special events, including weddings. 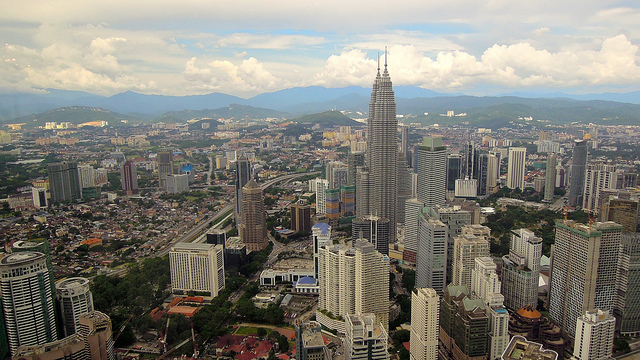 To connect with history and enjoy some recreation time, many visitors who book first class flights to Kuala Lumpur make it a priority to see Merdeka Square. The site is a celebration of Malaysian independence. The first place the Malayan flag was ever hoisted was in Merdeka Square, which occurred in 1957. The spacious green field is a favorite picnic spot and playground. Formerly, during the British era, it was a cricket pitch. The square is surrounded by several 19th-century buildings, including the St. Mary’s Cathedral and the Royal Selangor Club Complex.

Chinatown is a favorite destination among avid shoppers travel to Kuala Lumpur. Visitors should bring their negotiation skills, since proficient haggling can get the cost of merchandise to half the marked price or lower. Relaxing at a tea shop and sampling superb Chinese tea is a perfect companion stop to a major shopping excursion.

A major Indian heritage site for many visiting Kuala Lumpur is the Batu Caves, Malaysia’s most famous Hindu temple. Hindu religious rites are still practiced there by Indians every year. There are shrines to the three prime gods of Hinduism, those being Brahman, Vishnu, and Shiva. Make plans to take the 276 steps to the top of the mountain where the Temple Cave is located. An insider tip is to watch out for monkeys because they tend to snatch food items from unsuspecting guests.

If you are looking for cheap first class flights to Kuala Lumpur, contact our travel experts at Fly World Class. As part of our world-class service, you can receive assistance that will ensure a luxurious and tranquil flight and an effortless yet eventful visit to the Malayan metropolis.